LEDs light emitting diodes are driven with a forward current and are emitting light, with a color depending of the forward voltage drop of the diode. The electric energy to light conversion is not 100% and the not converted electrical energy is heating up the diode. Under normal operating conditions, approximately 50% to 60% of the input power is output as heat, while the rest of the input power is converted to light. 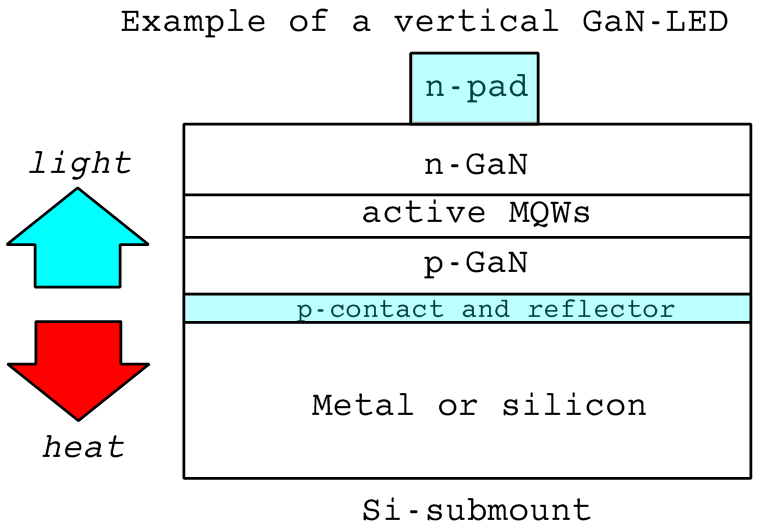 A main cause of LED failures is bad thermal management. Many performance characteristics of LED components are influenced by the operating temperature, so LED system designers need a basic understanding of thermal design and performance. A non-recoverable degradation due to high operating temperatures can happen. Exceeding the maximum operating temperature specification, which is typically a 150 °C junction temperature, can  cause permanent and/or catastrophic damage to LEDs, so care must be taken to operate LEDs below this limit. 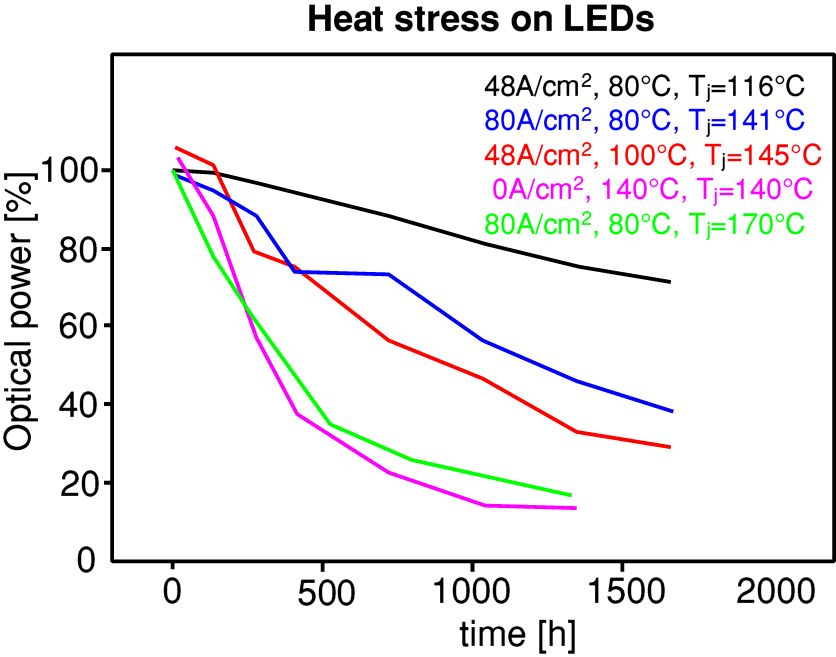 The life time of LEDs is often advertised as to be 50.000 or even higher - If you keep the LED junction temperature Tj always below 80°C you may achieve a good life time. if there is no active monitoring of Tj in a lamp unit existing you get just a promise of sales of the manufacturer based on averaged assumptions.

Especially there is another problem involved that makes the behavior of LEDs more difficult. When the LEDs are getting hot the efficiency of energy to light conversion is less, so that means there is even more heating if the electrical power is not taken back.The same problem is related to the aging. The light conversion is going back, because of internal defects of the internal lattice structure of the chip. When an LED is old it makes less light but more heat.

The LED junction should be thermal connected very good to a cooling element to avoid a too hot spot. Because the connections of the junction inside the package and from the package to the cooling block is not perfect we obtain a thermal resistance, which leads to a Delta T proportional to the actual wattage the LED is driven. So the LED junction itself is always driven hotter than the cooling environment. Because of this fact the maximum power and current must be reduced the hotter the environment is.

The Nucon® solution enables sensorless, direct and fast temperature monitoring of the junction LED temperature. The LED can be operated always below a dangerous temperature limit. Based on the current temperature the maximum output power will be smoothly reduced without noticeable flicker so the maximum drive limits of the LED will not be exceeded. This keeps the maximum life time. The disadvantage of a delayed over temp sensing and therefore stronger cut off protection is avoided.

Cost savings are substantial due to the absence of sensors along with their cabling, connectors, space requirements and additional parts. The on-chip temperature can be determined without any special fixtures, for
example in LED strings.

The innovative method is characterized by short interruptions of the LED supply
while a small capacitor is discharged over the LED to provide smaller measurement currents for monitoring LED voltage. The interruption for capture the voltage under low currents can be kept very short (10-20 micro seconds) to prevent any noticeable flicker for the eye or at motion pictures.

Many LED applications are using already pulse width modulation dimming and do have already interruptions in their driving, so the integration of the temperature monitoring is very easy.

The junction temperature measurement principle is the best and maybe the only way for an accurate measurement of the real temperature distribution in an application, as an evidence for it have a look at the technical article from Avago:
LED thermal testing.

Sooner or later also the very long lasting LEDs will come to end of life time. The end of life of an LED must not be a full damage it is defined by the reduction of light output down to 60% for instance. As long as all LEDs of a cluster do behave the same it is not a big problem - however LEDs inside automotive headlights and taillights can not be serviced so the full set must be replaced, which can be very expensive.

With our method we can:

Since LEDs are not fully out of service, when they are at end of life, there is an considerable danger for road safety that in the future vehicles with non sufficient illumination will be present without the driver being aware of.

Already new vehicles have non sufficient road illumination and this is not a problem of cheap cars as you can read in the lighting test article.

A correct and proper thermal management for the LEDs is a must have to avoid an early expensive replacement and a very bad advertisement of quality well visible on the roads.It's even a considerable risk driving with lighting systems, which are not easy serviceable as halogen or HID at end of life - which will come sooner or later for any kind of lighting device. 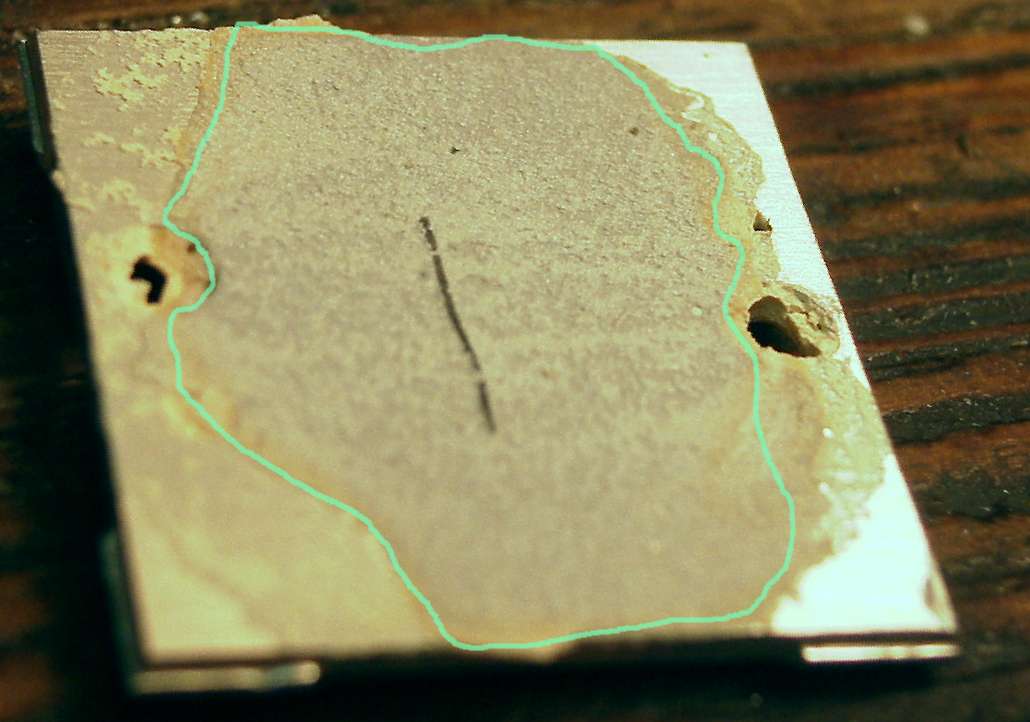 Thermal glue is aging over the years resulting in a smaller good contact area marked green. The risk of over heating the LED is increasing. 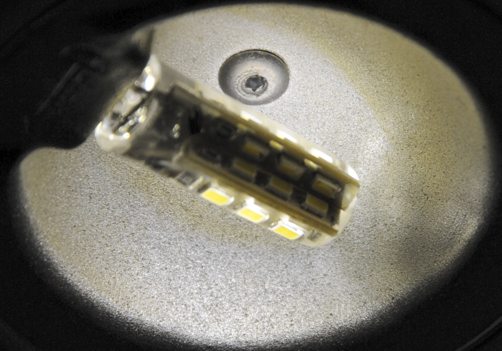 Promised to last longer than halogen. In fact the halogen in my kitchen were running about 25 years. This no name  LED was installed about 2 years ago. The cheap and primitive application of LEDs is an environmental and money problem. There is no saving of energy and resources if the quality is that bad.
The dead LEDs are electronic waste, which are difficult or nearly impossible to recycle. It is not to understand why government was stoping the sales of filament bulbs, while tolerating selling of no quality LED bulbs.